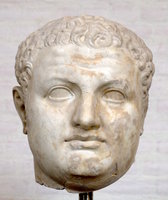 Titus (born December 30th, 39 in Rome, † September 13th, 81 in Aquae Cutiliae, Lazio) was from 24th July 79 to 13th September 81 Roman Emperor. He followed his father Vespasian on the throne. Against his succession, there seems to have been no resistance: Titus was a successful general, who had decided the Jewish War for Rome and had returned in triumph. In addition, he was soon involved in political affairs by his father.

His short reign was overshadowed by several catastrophes: Mount Vesuvius erupts and buries the cities of Pompeii, Herculaneum and Stabiae in mud and ashes. In the same year Rome is rife with disease and the following year a three-day fire rages in the capital. It destroys large parts of the city center. The Emperor immediately initiates relief measures and pays them out of his own pockets.

To distract the battered people, he inaugurated the Amphitheatrum Flavium - better known as the Colosseum - with 100-day games. Gladiator fights, animal hunts, chariot races and even sea battles should delight the spectators and at the same time announce the generosity of the Flavians.

Like his father, Titus continued to seek the legitimacy of his family's reign. He focused mainly on the coinage: He likes to show himself as a victorious general and thus as a guarantor of peace and prosperity. In order to make up for the missing illustrious ancestral gallery, he struck commemorative coins for Augustus and Claudius proving himself as a worthy successor.