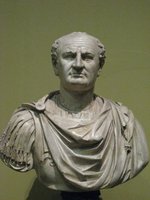 Vespasian (born November 17, 9 in Falacrinae, † June 23, 79 in Aquae Cutiliae) was from 69 to 79 Roman emperor. In the civil war after the death of Nero and the end of the Julio-Claudian dynasty and in the conflicts over the imperial office in the year of the Four Emperors 69 AD, he prevailed as the victor. He was thus the first emperor who did not come from the Senate aristocracy.

Vespasian managed to stabilize the empire during his ten years of rule. He put his rule in the Julio-Claudian tradition and took in particular to Augustus, also to set off from the antics of Nero. In addition to his achievements on the battlefield, he showed himself above all in the financial policy: he introduced new taxes, revived old ones and added to those still existing. Despite this fiscal rigor, he was a popular and successful emperor, also because he knew how to deal with the Senate and put the new money into a busy construction in Rome itself.

The minting of the Vespasian initial ties to the coinage of necessity of the Civil War and many smaller mints throughout the empire struck coins in his name. After his arrival in Rome in the spring of the year 70, these workshops are closed continuously and the coinage ultimately took place almost exclusively in Rome. Vespasian's coins often refer to his own deeds, such as the capture of Judea or the appointment of his sons as successors. The bronze coins like to show the goddesses Pax, Fortuna, Felicitas, Salus and Roma and thus announce his idea of ​​a peaceful rule whose blessings benefit all Romans.