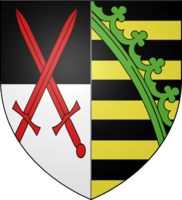 Saxony was first ruled by changing nobility. In 1089 House Wettin came to the throne of the Margrave of Saxony. In 1180 the territory of Saxony was divided, and only the eastern part carried the name, which was now ruled by the aristocrats from the House of the Askans. The oldest Saxon coins come from this phase: the so-called Sachsenpfennige. They were minted in Meissen and are based on the monetary standard of the Carolingian coin reform of 793/94. They were minted in a high range of variations up to the times of the High Middle Ages.

In 1423, the Wettins came back to power in the Electorate (established by the Golden Bull) in 1356 and were to govern the area until the dissolution of the Kingdom of Saxony in 1918. The Wettins quickly expanded their influence and increased the area they controlled almost as fast as they split it again by dividing into secondary lines. Thus principalities such as Saxe-Weissenfels, Saxe-Neu-Gotha and Saxe-Coburg-Saalfeld developed. Through a flourishing mining and trade, much money was circulated in the 15th century, and the Saxon rulers used to mint a rich coinage, mainly made of groschen. The so-called Meissen groschen was of great importance in the Holy Roman Empire.

The separation into two main lines in the Division of Leipzig (the Catholic Albertinians and Protestant Ernestines) led to the Saxon Coin Debate beginning around 1526, because the houses could not agree on a common monetary policy. Duke Maurice declared the final coin separation of the Saxon lines in 1547. In 1556 Elector Augustus erected a mint in Dresden and closed all other mints in the country. Until its closure in 1887, it minted mainly thaler and gulden.