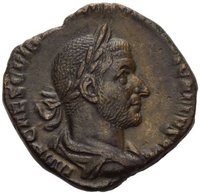 Gaius Vibius Trebonianus Gallus was Roman Emperor from 251 to 253. He had two children with his wife Afinia Trebonianus Gallus: Volusian and a daugther, Vibia Galla. He took over the throne from Traianus Decius, who had fallen in battle. The son of the old emperor - Hostilian - was appointed by Gallus as his co-regent and augustus to bind his own family more closely to the old rule.

Hostilian, however, died in the same year in a rampant epidemic and so Volusian was appointed augustus. The brief reign of father and son was marked by the plague, a renewed invasion of the Sassanids and increasing raids of the Goths. Trebonianus Gallus was killed by mutineers with his son when they made their way north to the Danube to face the usurper Aemilian.

Due to the brevity of his rule, Trebonianus Gallus was probably not a prolific minting authority. His coins are distributed only over a few types. The antoniniani and the few bronze coins promise a secure and benevolent rule with images of Concordia and Libertas. Apollo and Pietas are to protect against the plague. The images of the Juno Martialis remain mysterious and singular in the entire imperial coinage of Rome: The goddess sits in a round temple, holds ears of corn and is sometimes accompanied by a peacock.