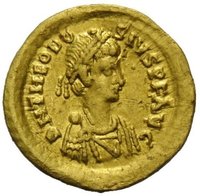 Theodosius II was Eastern Roman Emperor from 408 until his death in 450. He was the only son of Emperor Arcadius and his wife Aelia Eudoxia. At the age of seven, he followed his father to the throne – he was named Augustus in 402 when he was only a few months old.

Initially, the praetorian prefect Anthemius took over the guardianship. After his sudden disappearance in 414, the sister of Theodosius - Aelia Pulcheria - took over the regency. The devout Christian woman swore eternal virginity to scare off any aspirants for her hand and thus secure the throne for her brother. At the latest in the years around 420 Theodosius ruled for the most parts independently, although he often gave his sister, his wife Aelia Eudocia and various favourites free hand in matters of the court.

His reign brought the empire a cultural upswing, the so-called Theodosian Renaissance: Classical Greek education was considered a status feature of the elites, poetry flourished and he collected all legal decrees since the time of Constantine I in the Codex Theodosianus. He distinguished himself in Christian and ecclesiastical matters: He closed the sanctuary of Zeus in Olympia and thus officially ceased the Olympic Games and he convened the Council of Ephesus of 431, which declared Mary the Mother of God.

The gold coins of Theodosius such as solidi and tremisses are conservative issues that continue the family traditions. Coin types such as the enthroned Constantinople or the dancing Victory with a cross globe combined with legends such as GLORIA, SALUS and SECURITAS speak of power-conscious rule and the maintenance of prosperity and peace within.