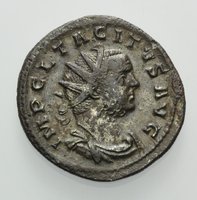 Marcus Claudius Tacitus was Roman emperor from 275 to 276. Most ancient sources for the accession of Tacitus depict him as a "Senate emperor": Not only did he come from the senatorial upper class of Rome, but was appointed by the Senate. The army agreed to the appointment, probably because Tacitus already had experience as a military commander.

After a brief stay in Rome, he made his way to the eastern border of the empire, accompanied by his half-brother Florianus, whom he had appointed praetorian prefect. From north of the Black Sea, the tribes of the Goths and Herules invaded Asia Minor. The Emperor was able to win against the Germans and therefore took the title Gothicus Maximus ("The greatest conqueror of the Goths"). Only a short time later, 75-year-old Tacitus died in Cappadocia, probably because of his old age.

Of the coins of Tacitus mainly antoninianii have survived. He issued only a few of the golden aureii and the bronze asses and no sestertii and dupondii of bronze at all. A high number of mints operated in the short reign of the emperor: from Gaul to Italy to Syria artisans made coins with the image of Tacitus. The types announce the good rule of the emperor and the blessings of peace and prosperity that it brings.