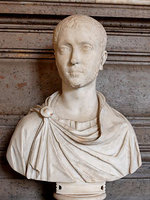 Marcus Aurelius Severus Alexander was from 222 until his death 235 Roman emperor. His original name was Bassianus Alexianus. He was adopted under the scandalous rule of his cousin Elagabal into the family of the Severians, elevated to Caesar and thus declared the designated successor. He took the throne a year later after Elagabal's assassination. Under the strict guidance of his grandmother Julia Maesa and his mother Julia Mamaea he tried to avoid the extravagances of his predecessor and treid to use the Senate as a pillar of his rule.

His dependence on the women of his family and the courtship for the goodwill of the Senate, however, aroused resentment in the army, especially the Praetorian Guard. Soon the troops revolted and riots broke out in Rome and the provinces, which could only be controlled by force, executions and occasional murders. In addition, the borders of the empire were increasingly threatened. In the east rose the empire of the Persian Sassanids and in the north the Alamanni rose up. While Severus Alexander was able to put a stop to the Persians, his campaign against the Germans was his doom: because of his alleged miserery against the troops they rose against him and killed him and his mother in a camp near Mainz.

The denarii of Severus Alexander show the pictures that have been customary for a longe time, which testify to the virtues of the emperor: gods like Pax, Libertas and Virtus show his distinguished character, while Mars, Fides and Victoria speak of his military strength. The campaigns in the east and north have found little impact on coinage. The frequent representations of the sun god Sol indicate that the emperor was probably a follower of Mithras, since Sol is regarded as his Roman equivalent.