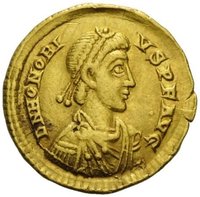 Honorius was Western Roman Emperor from 395 until his death in 423. He was the son of Theodosius I and his first wife Aelia Flacilla. After the death of his father, he shared the rule of the nominally undivided kingdom with his older brother Arcadius, who resided in Constantinople. The sons of Theodosius, however, were more bound in rivalry than in brotherly affection.

The rule of Honorius was beset by a plethora of plagues: short-lived revolts broke out everywhere in the empire, and there was a counter-emperor in Britain, one in Gaul and one in Hispania. The Rhine border broke down at times. And the Visigoths, under their king Alaric, invaded the empire again and again, and succeeded in the unthinkable: for the first time in 800 years barbarians conquered Rome and plundered the cityfor three days.

According to a historical anecdote, this incident barely touched the emperor: he cared much more about the well-being of his favorite chicken Roma than murdering and looting barbarians in the venerated city.

The coinage of Honorius was characterized by certain monotony. The golden solidus continued to be the lead currency, the purity of which was jealously guarded. The coin types speak of the glory of the Roman army, the victory over the barbarian hordes and the emperor as guarantor of the cohesion and prosperity of the empire.