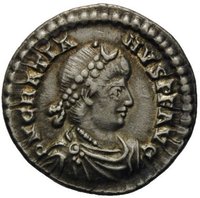 Gratian (Latin: Flavius Gratianus Augustus; 18 April/23 May 359 – 25 August 383) was Roman emperor from 367 to 383. The eldest son of Valentinian I, during his youth Gratian accompanied his father on several campaigns along the Rhine and Danube frontiers.

Upon the death of Valentinian in 375, Gratian's brother Valentinian II was declared emperor by his father's soldiers. In 378, Gratian's generals won a decisive victory at the Battle of Argentovaria. Gratian subsequently led a campaign across the Rhine, the last emperor to do so. That same year, his uncle Valens was killed in the Battle of Adrianople against the Goths – making Gratian essentially ruler of the entire Roman Empire. He favoured Christianity over traditional Roman religion.