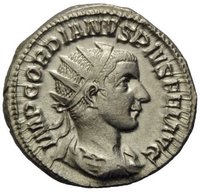 Gordian III. (Latin: Marcus Antonius Gordianus Pius Augustus; 20 January 225 AD – 11 February 244 AD) was Roman Emperor from 238 AD to 244 AD. He was proclaimed as caesar and heir at the tender age of thirteen. After the assassination of his two co-emperors, he was left sole ruler. With the help of his capable advisor Timesitheus, he enjoyed civil and military excess.

A disastrous campaign against the Persians in 242 AD ended all this. Timesitheus died and his deputy Philip the Arab took his place at the side of the emperor. He was a devious and powerhungry man (he was suspected to have murdered Timesitheus) and began immediately with the underminig of the support for Gordian III. Any military setback and difficulties were blamed on the inexperienced boy emperor. Gordian became aware of Philips' machinations and put it to the soldiers to vote for whom they wanted as emperor. And so on 25 February AD 244, on the banks of the Euphrates, the soldiers elceted Philip emperor and Gordian III was murdered.

The great majority of his coins are so unified in style and fabric that they may assigned with confidence to the central mint of Rome. At the beginning of his reign the images show the emperor under the protection of Jupiter and his loyal troops as his young age might suggest. Later issues feature a more active role of the emperor and refer to his Aequitas and Liberalitas.