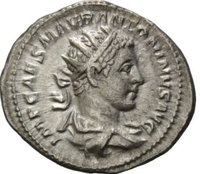 Elagabalus, also known as Heliogabalus (Latin: Marcus Aurelius Antoninus Augustus; c. 203 – March 11, 222), was Roman emperor from 218 to 222. A member of the Severan dynasty, he was Syrian, the second son of Julia Soaemias and Sextus Varius Marcellus. In his early youth he served as a priest of the god Elagabal in the hometown of his mother's family, Emesa.

In 217, the emperor Caracalla was assassinated and replaced by his Praetorian prefect. Caracalla's maternal aunt, Julia Maesa, successfully instigated a revolt to have her eldest grandson (and Caracalla's cousin), Elagabalus, declared emperor in his place. Elagabalus, barely 14 years old, became emperor, initiating a reign remembered mainly for sex scandals and religious controversy.

His behavior estranged the Praetorian Guard, the Senate, and the common people alike. Amidst growing opposition, Elagabalus, just 18 years old, was assassinated and replaced by his cousin Severus Alexander on 11 March 222, in a plot formulated by his grandmother, Julia Maesa, and carried out by disaffected members of the Praetorian Guard.