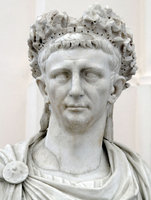 Claudius (Latin: Tiberius Claudius Caesar Augustus Germanicus; 1 August 10 BC – 13 October 54 AD) was Roman emperor from 41 to 54. As a member of the Julio-Claudian dynasty, he was born at Lugdunum in Gaul, the first (and until Trajan, the only) Roman Emperor to be born outside Italy.

A childhood attack of infantile paralysis had left him with a grotesque appearance and it was also generally assumed that he was weakminded. So he took little part in public life and filled his time with books and antiquarian studies. This reclusiveness may have saved his life, because most of his male family members fell victim to one tragedy or another, politically motivated or otherwise. That is why, after the death of his nephew and predecessor Caligula, he was one of the few probable heirs and was thus proclaimed emperor by the Praetorian Guard.

He soon proved himself as skilled administrator and he was succesful even in military matters: in 43 AD he personally took part in the succesful invasion of Britain. He was married four times and he adopted the son of his fourth wife - Agrippina Junior - from a previous marriage, Nero, who then became the heir to the throne. Claudius died in 54 AD, possibly poisoned by his wife.

Possibly the supervison of coinage as a whole was less efficient under Claudius than it had been previously. Plated denarii became much more common than before. The images center around his family and his personal policy of civil Constantia and Paci Augustae, with its overtones of Victoria and Felicitas.