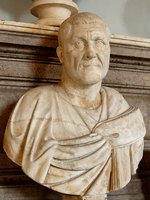 Maximinus I. Thrax (Latin: Gaius Julius Verus Maximinus Augustus, 173 –238, also known as Maximinus I, was Emperor of the Roman Empire from 235 to 238.

He was a so-called barracks emperor of the 3rd century; his rule is often considered to mark the beginning of the Crisis of the Third Century. He died at Aquileia whilst attempting to put down a Senatorial revolt.

Most likely Maximinus was of Thraco-Roman origin. His background was that of a provincial of low birth, and was seen by the Senate as a barbarian, not even a true Roman.He elevated himself via a military career from the condition of a common soldier in one of the Roman legions to the foremost positions of political power. He rose to command a legion and after the murder of his predecessor, the Praetorian Guard acclaimed him emperor, and their choice was grudgingly confirmed by the Senate.

Maximinus hated the nobility and was ruthless towards those he suspected of plotting against him. He was murdered on a military campaign in 238 with his son and his chief ministers.